The conceded goal boosted Plzeň and they finally won over Larnaca 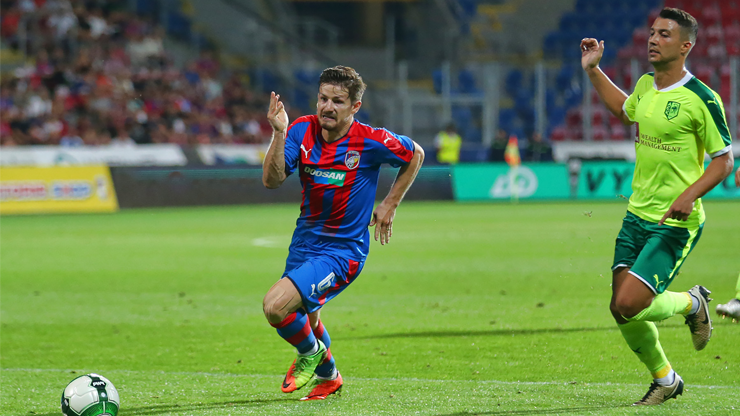 ​On 17th August Viktoria Plzeň played the Europa League play-off match in Larnaca, the starting line-up stayed the same as in the previous match. Recovered Roman Hubník returned to the defence, Tomáš Hořava and Václav Pilař played in the midfield and Marek Bakoš was the striker for this match.

The match did not start optimistically for Viktoria because on 8 minutes their opponent performed a quick action. Jorge shot on goal but his attempt was rebounded by Hruška, however, there appeared running Acorán who easily scored. Viktoria were losing 0-1 from the beginning of the match. They tried to response soon after that when on 15 minutes Řezník had an effort on goal but Juan Pablo was ready. Immediately after that they had another dangerous chance when the striker Tričkovski run alone against Hruška who was supported by Tomáš Hájek on the goal line. The defender saved Viktoria from 2-goal leading of their opponent. On 27 minutes Daniel Kolář cooperated with Marek Bakoš but the Slovakian forward failed in the scoring phase. He was more successful 2 minutes later whe after a foul on Pilař he executed a free kick and scored – 1-1! Larnaca wanted to show their quality at free kicks and on 35 minutes Tričkovski headed the ball in the penalty area of Viktoria, nevertheless, this situation was solved by a good position of Plzeň´s goalkeeper Hruška. The fans could see plenty of goal chances and on 36 minutes Pilař and Limberský passed the ball to Kolář who added Viktoria´s second goal – 1_2 for Plzeň! This was the half-time result.

On 52 minutes Hořava opened the 2nd half by a shot on goal but he missed the target. The pace of the game calmed down in the 2nd half and there were not so many promising chances as in the 1st half. On 63 minutes the coach Vrba substituted Pilař for Kopic. The home team possessed the ball most of the time in this phase of the match and Larnaka focused more on the defensive work and quick breaks. One of them was stopped by Hubník who stole a ball from Tričkovski. On 73 minutes Larnaka played by a hand so Viktoria were given a penalty kick – Marek Bakoš scored and the score changed again – 1-3 for Plzeň! 3 minutes later he was replaced by Řezníček. The last substitution was Zeman for Čermák. The score did not change until the end of the match and Plzeň won 1-3.