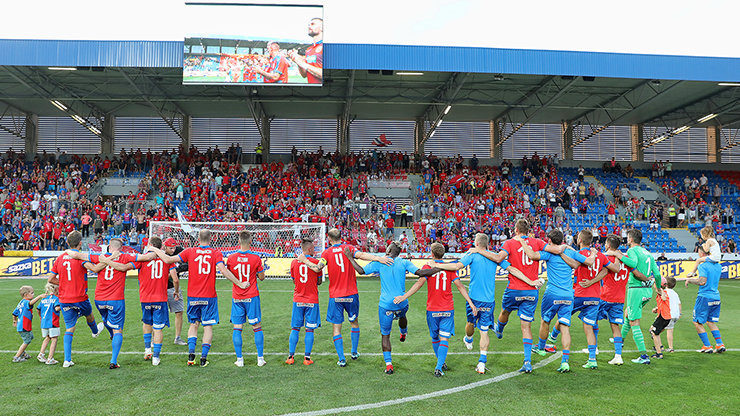 Pavel Vrba made two changes before the start of the first home match, Tomáš Hořava and Jakub Řezníček appeared in the starting XI. After goalless 1st half the score was opened by Michael Krmenčík who placed the ball behind the goalkeeper in 62nd minute.

Liberec appeared in a big chance right at the beginning of the match when Jakub Pešek rushed alone to Kozáčik but his attempt was rebounded off the corner. This was the only bigger chance for a long time. Both teams played a careful game after that, Viktorians had an effort on goal from time to time but Hladký was not threatened, only by some long-distance attempts as well as Matúš Kozáčik on the other side.

Jakub Řezníček had a good chance 5 minutes before the break when attempting to shoot from the first touch inside the penalty area but missed the target. Řezníček was substited by Aleš Čermák for the 2nd half.

Plzeň entered the 2nd half in a very active way. They had good chances right at the beginning when Milan Petržela and afterwards Luděk Pernica had a chance after a corner but both attempts were stopped by Liberec´s defence. In 62nd minute the score of the match was opened by Michael Krmenčík. Jan Kopic run with the ball on the left side and then passed it to Čermák and then Krmenčík who scored – 1-0.

Kopic could increase the leading but his technical attempt only touched the right goal post. Substituted Čermák was also very active when he could increase the score about 10 minutes before the end but missed the target. Chorý was stopped by the goalkeeper Hladký. Mashike then shot over.

"They attacked us very high and we had troubles with it. Everytime we combined from the back we had to kick long balls and the rebounded balls were gained by our opponent. It changed after the break," Roman Hubník evaluated the match. The captain admitted the first 60 minutes was not ideal from our side. "Liberec was very agressive and running, they were better in the 1st half than us. We changed our game scheme and started to be more encouraged. We could add more goals because we had some chances, however, we are glad for the victory," Hubník said.