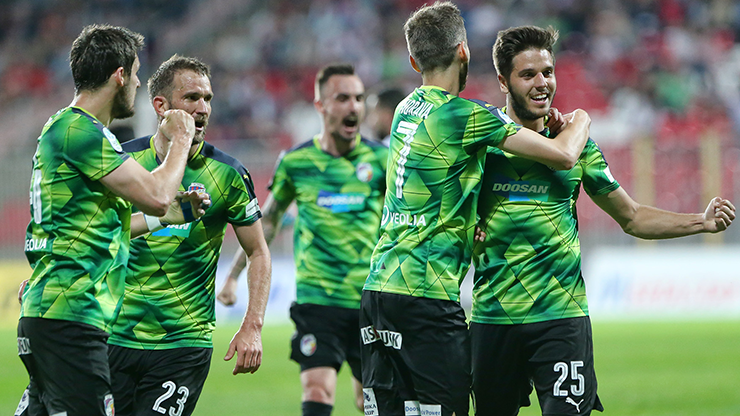 Viktoria played the 25th round of the HET League against Zbrojovka Brno. Lukáš Hejda, Daniel Kolář and Michael Krmenčík all missed the match because of injury. Aleš Čermák appeared in the starting line-up and finally became the hero of the match – he scored a hattrick and Viktoria won 3-1!

The home team first threatened the gate when Jan Polák shot on Matúš Kozáčik on 8 minutes. Several moments later Martin Zeman checked Dušan Melichárek´s attention but he saved his attempt. Plzeň did not wait long because on 26 minutes Viktorians cooperated well, Milan Havel crossed the ball to Aleš Čermák and he opened the score of the match. 6 minutes later Viktorians had two-goals leading after a nice combination of Marek Bakoš and Jan Kopic, Aleš Čermák finally scored again. With the half-time approaching Zbrojovka had an excellent chance to change the score but Petr Pavlík missed the target. The half-time result was 2-1 for Plzeň.

Viktoria could not dream about a better entry to the 2nd half. 3 minutes after a comeback from the dressing rooms Kopic shot on goal but Čermák was ready for rebounded ball and finished his hattrick on 48 minutes! Brno could score their first goal on 57 minutes but Rafael Acosta´s pass was stopped by Roman Hubník. The coach Pavel Vrba was forced to make the first substitution on 61 minutes when injured David Limberský was replaced by Daniel Kolář. Several moments later the leading could be four-goals. Kopic quickly played a corner but Patrik Hrošovský did not take advantage of the situation and missed the target. Finally the home team made it and at least reduced the score. Musefiu Ashiru run alone from the midfield to the 18-yard box where he gave Kozáčik no chance.

Viktoria won the match 3-1 and brought all 3 points.