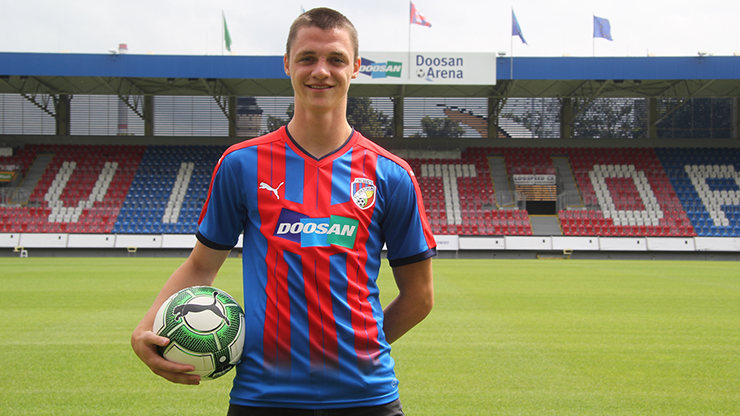 Viktoria Plzeň announces another signing. A four-year contract with the club was signed by the talented midfielder Dominik Janošek who arrives from Slovácko. However, he will stay playing in 1. FC Slovácko on loan.

The midfielder who is going to celebrate his 20th birthday tommorow played the highest league as a junior. He spent the first half of 2017/18 season in Zbrojovka Brno where he played 4 matches. He significantly performed in spring in Slovácko where he played 741 minutes in total within 10 matches.

Dominik Janošek also played for junior national teams of the Czech Republic, for example he played one match for U21. He signed a four-year long contract with Viktoria but he will play for Slovácko for the time being.

"Dominik is a very perspective and talented footballer so we´re glad to welcome him here in our team. It will be the best solution for his football growth to regularly play the highest league so he will have the summer trainings and the start of the upcoming season in Slovácko, nevertheless, we will carefully watch him. I believe that in future he will be a steady member of our team," the COE Adolf Šádek commented on this transfer.

"The Viktoria´s interest for Dominik Janošek made us pleased. He´s got all prerequisites to play an important role in their team in future. We´re also happy both teams agreed on the player staying in Slovácko in the next months so he can gain more experience in the highest league," Roman Brulík, an RBR Sport Consult agent representing Janošek, said.

How did the dealings go?
"It was quite quick. The season was over, then I was with the national team and then on holiday. But I´ve got great agents who negotiated everything for me so I´m here now."

For the time being you´ll be on loan in Slovácko. Will you have a bigger motivation to show what is inside you?
"Definitely. Although I´m  a player of Plzeň I will still play for Slovácko where I´ll do my best to regularly play in the starting line-up and perform well."

You have got your first higest league experience with Brno, in spring you played for Slovácko. How was the feeling to play the highest domestic league at the age of 19?
"Incredible. I had the first start for Brno against Slovácko and the coach Roman Pivarník gave me the confidence. I played only one minute but I had the chance to play and that´s what counts."

You also play for the junior national teams. What does it mean for you?
"To wear the lion on our chest is an honour for every football player. I deeply appreciate every match for national team."

When Slovácko played the match in Plzeň in spring (1-1), you played it all…Do you remember it?
"I remember it well, it was a merry-go-round (he is smiling). But we gained one point here, mostly thanks to our goalkeeper Heča. I remember the atmosphere, it was great here, amazing stadium…I´m so looking forward to it."