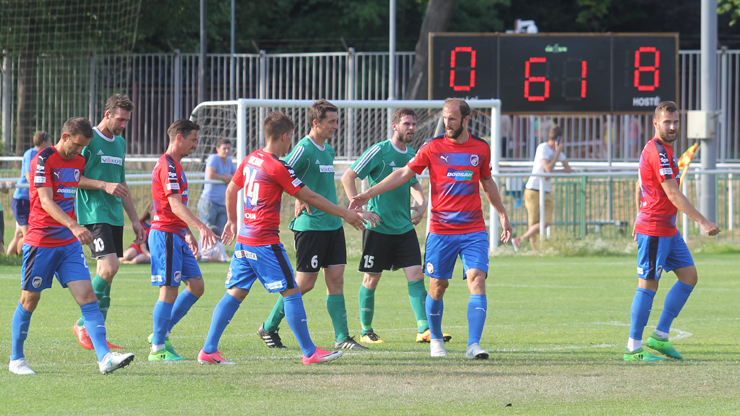 On 7 minutes Řezníček scored the first goal but it was not counted for standing off-side. Moments later Viktoria could celebrate the goal when Daniel Kolář shot the ball over the goalkeeper Vild - 1-0. On 11 minutes the goalkeeper Sváček had to be ready against Jan Hereit. After that the home goalkeeper was busy against Pilař´s attempt but his effort was not enough against Jakub Řezníček´s shot - 2-0. Lukáš Hejda could add the third goal of the match after a corner as well as Miloš Kratochvíl from a 20-metres long attempt but the goalkeeper was ready.

On 28 minutes Lukáš Pfeifer increased the score to 3-0, soon after that Václav Pilař added the 4th shot on goal who received the ball in front of an empty gate. On 37 minutes Limberský passed the ball to Řezníček who added the 5th goal. A few minutes later he finished his hattrick when he received Diego Živulič´s crossed ball. Řezníček scored again before the end of the 1st half and increased the score to 7-0.

Pavel Vrba sent a competely different line-up in the 2nd half, the goalkeeper was Matyáš Šampalík and the captain Tomáš Poznar. On 55 minutes Milan Petržela hit an upright and Marek Bakoš kicked a rebounded ball behind the goalkeeper - 8-0. Soon after that Radim Řezník headed the ball and the score was 9-0.

On 77 minutes Plzeň added the l0th goal of the match and on 81 minutes Rokycany scored a goal as well when Pavel Grambal appeared in a chance.