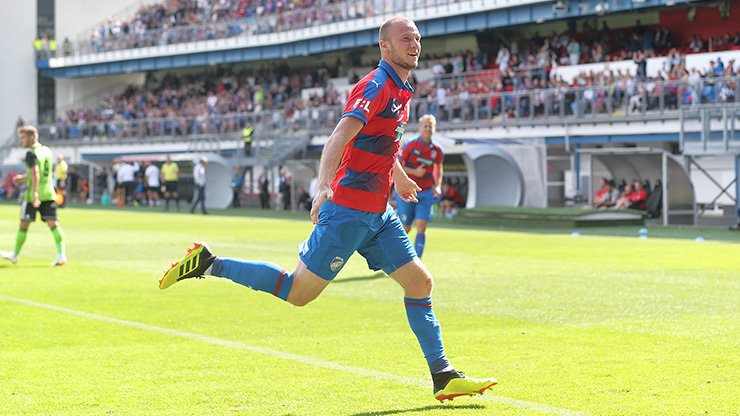 Jan Kopic returned back to the starting line-up as well as Aleš Čermák but the hero of the match was again Michael Krmenčík. He scored 3 goals so his total league score is 7 goals, Řezník added 1 goal and at the end Řezníček scored 2 more goals. Plzeň won the first match in this season with a higher than two-goals leading.

Right from the very beginning the fans could enjoy very interesting football in front of both goals. At first, Aleš Čermák had an effort on goal but he was not successful from 20 metres. On the other side the visiting team threatened the goal after a corner kick.

After series of several chances Viktorians finally opened the score. Hořava cooperated with Čermák and crossed a perfect ball in the penalty area. Michael Krmenčík was ready there and flying he placed the ball near the back upright.

By this goal Krmenčík evened up Nikolay Komlichenko, the best league scorer who has scored 5 goals so far. He himself, however, scored today 1 goal as well. The equalized score did not take long because Krmenčík returned the leading on Viktoria's side after an excellent crossed ball from Jan Kopic.

At the beginning of the 2nd half Patrik Hrošovský shot on goal but he missed the target. Moments later Viktorians added another goal and they had two-goals leading. Michael Krmenčík had a very easy task this time because Petržela and Čermák prepared this situation perfectly for him and he stayed alone on the edge of 18-yard box.

Plzeň was craving for more goals and 10 minutes later they could score again but Petržela's attempt was not successful but the one after a corner was better. Pernica's shot was rebounded by Šeda only to Řezník who immediately placed the ball in the gate. Krmenčík could after that increase their leading but he hit only running Šeda.

At the end of the match Jakub Řezníček pleased the fans by two goals when on 90th minute headed the ball from David Limberský and in extra time he added the last goal of the match – 6-1.

Krmenčík was pleased after the match. He scored hattrick on this day. "I'm very happy for 3 goals, you don't score it every day. The whole team knew what we want to play. Hats off we scored 6 goals today," the scorer said. Plzeň is sitting first in the league standings. "At the beginning we had to let our game sit and calm but now we rush like a well-oiled machine. I believe our performance will be better and better. We want to make our fans happy."