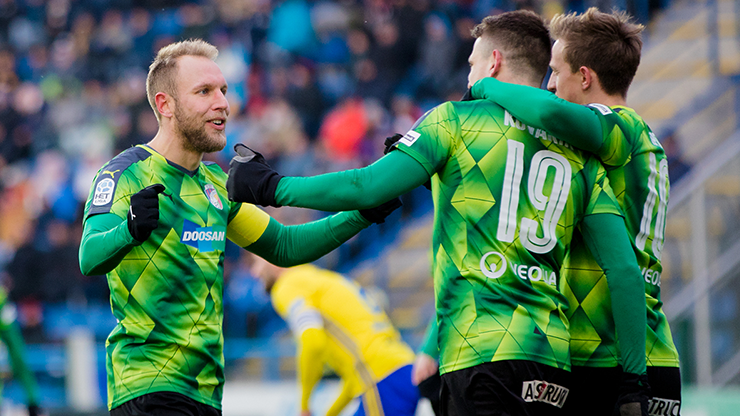 In 21st round of the HET League Viktorians travelled to Zlín. The coach Pavel Vrba changed several players in the starting line-up. In comparison with the match against Sporting Matúš Kozáčik, Lukáš Hejda, David Limberský, Daniel Kolář and Tomáš Chorý appeared on the pitch from the beginning. Kolář was finally the only scorer of the match and Viktoria reached all 3 points!

Viktorians were very active from the first minute and soon got in leading on 12 minutes. Jan Kovařík got into the penalty area and found Daniel Kolář who headed the ball behind the home goalkeeper. On the other side Zoran Gajič beat his man and passed the ball to Jonathan Bijimine who was dangerous but finally the referee blew an offensive foul. Zlín based their game on long balls over the pitch, nevertheless, Viktoria´s defensive line was strong. On 32 minutes Plzeň had a promising chance to score the second goal when Jan Kopic passed to Tomáš Hořava but he failed in the scoring phase and the goalkeeper Zlámal saved his attempt. The home team performed a great action but Ubong Ekpai shot off the goal. On 39 minutes Lukáš Hejda headed the ball after a free kick but missed the target. Viktoria won the 1st half 1-0.

On 51 minutes Daniel Holzer noticed the first Zlín´s shot on goal but his attempt was stopped by the goalkeeper Matúš Kozáčik. Active Ekpai had an effort on goal later but Kozáčik was ready again. Pavel Vrba made the first substitution on 61 minutes – Tomáš Chorý was substituted by the best HET League scorer Michael Krmenčík. He immediately participated in the game. After Kopic´s crossed ball he promptly shot towards Zlámal but he performed an excellent save. Petr Jiráček had a big chance to equalize the score but missed the target.