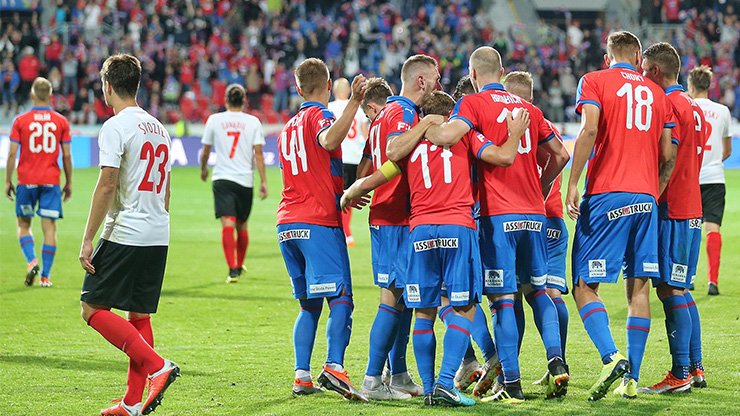 Ubong Ekpai made his debut in the starting lineup against Opava. Jan Kopic was back in the business after injury and Lukáš Hejda replaced the suspended Roman Hubník. It was a cautious game for both teams for a long time, the only strike came in the very end of second half, when Patrik Hrošovský scored a goal from penalty spot.

After cautious beginning from both teams, it was Pavel Vrba's side who began to operate in opponent's box. Hořava took a free kick from good position in the 18th minute, but couldn't fire it through wall of Opava defenders.

On the other side of pitch Pavel Zavadil showed his great technical skills, when he sent an accurate cross to Kuzmanovič. Kozáčik had to make a great save after the shot by Opava skipper.

After that, Plzeň was more active again. Ekpai pulled a hard shot from quick counter, but missed the target, free kick taken by Jan Kopic was eliminated by Šrom and moments before half time – Krmenčík had a good chance in similiar position, as Ekpai a few minutes before, but didn't hit the goal either.

With thirty minutes to go, Daniel Kolář came off the bench and made his competitive debut for Viktoria in this season. There weren't many stunning moments in the second half. Krmenčík managed to score in the 73th minute, but the goal was ruled out for offside.

Nevertheless, there was a joy on the home side after all. After handball in the box from one of Opava players – referee called a penalty with a little help from VAR. Patrik Hrošovský as a skipper took the ball and calmly sent it into top left corner to seize three points.

Pavel Vrba's commentary:
"We made that game tough for us, especially in the first half. We could have scored twice, but we weren‘t accurate enough with our finish," Vrba said. Despite goalless score, Viktoria boss still hoped for three points. "I always believe in my team, no matter what is the time." He also praised Lukáš Hejda, who hadn't played for a long time because of injury. "I'm happy Lukáš played well in such a difficult game," Vrba added.